This is how I reversed my diabetes, lost 20 kilos, and took control of my life

Updated on:14 September 2020, 19:00pm IST
Diabetes is a terrible affliction, one that requires a life-long course of medication. But Manisha Mahajan managed to wean off the pills by fixing her diet and getting her weight in control. This is her story.
GurgaonMoms

This story has been submitted by GurgaonMoms on behalf of Manisha Mahajan, who is a chartered accountant turned entrepreneur. She is also a writer, a blogger, and has published a book on poetry.

I had recently moved to my current house and there were still so many things left unpacked. As I started to open the cartons, my view led me to the treadmill lying in the corner… it was being used as a storage unit and all kinds of paraphernalia hung from it.

Not for once did the thought cross my mind that I should put it to use. I never did think that I was fat or unhealthy. I was just going through life on autopilot, one day after another. Food was my partner for everything, the first and foremost being the provider of solace to my frazzled nerves.

Then came the time for my annual health checkup and I decided to add the Hba1c test on the list along with the fasting sugar. When the report came, I was shocked. My Hba1c was a 12.8 and my fasting sugar was a towering 457. I called my doctor in the morning, only to hear him say four terrifying words: How are you surviving?!

There were no symptoms or telltale signs. I didn’t even know that I had diabetes or that it could have lasting effects on my body. I looked at the figures in sheer disbelief and thought: “Why me? Had I not had enough worries in my life already?”

I chose to think that the report must have been wrong and so, I got myself re-tested in two days. The results were the same. All hell broke loose, as I went through stages of denial and anger. I felt lost and devastated as I was already going through multiple personal and professional battles and all this seemed too much to handle. 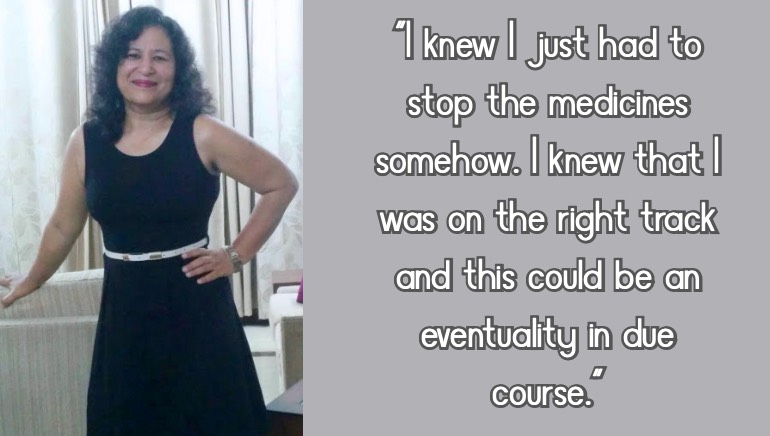 I was dreading going to the physician. I weighed 81 kilograms and I thought to myself, “When did I become so heavy? How clueless was I?”

I was going for my regular walks thinking that everything is fine, but I was not particularly watching my diet. I was gorging on humongous quantities of food, snacks, sweets and God knows what.

Also, read: You can reverse diabetes by losing weight, according to this British study

After discussing with my diabetologist, I realised that I was primarily on a carbohydrates diet. There were many debilitating thoughts, negativity, pent-up anger, and a lot of debris in my mental space. I was nestling a whole gamut of emotions, which were all resolved by one thing—food! And so, not just my physical weight—my mental weight also needed unloading.

I finally decided to take action…
Within 15 days, I got myself together on all fronts. I stopped eating. Suddenly the word, “diet” seemed all important. A plan was in place. I had to eat about a thousand calories in a day. The medications started simultaneously. I had to lose weight, so I joined a gym. It was hard in so many ways.

The exercise made my muscles sore and my back pain flared up. The lack of food and the effect of medications made me nauseous and weak. My head would go around in circles, as my blood sugar felt low. I was feeling sicker day by day and yet, I kept going on doggedly. This was a race I had to win.

And then the results starting showing…
My body and my mind were on the battlefield, fighting to win. In roughly about a month, the results finally started to show. It was around this time that I got the determination to scale this up a notch higher.

I just had to stop the medicines somehow. I knew that I was on the right track and this could be an eventuality in due course. Things were marginally better, as my weight started reducing. I looked better, but felt worse. The medication had increased by now and was affecting my gut, which made this entire process quite taxing.

Adding to this stress was a work project I had picked up, which meant long hours of travel to various government offices with barely any facilities. All this by the way, in the humid months of July and August. The problems of the bladder incontinence and the need to eat at regular intervals made this difficult.

There were times when I had to stop at the roadside shops to pick up a packet of chips, so that I could avoid the fainting-like spells. Every single day, I would think of quitting and just continuing life as it had been. I would tell myself, “I will just take the medications, get my blood sugar down and that’s that.” 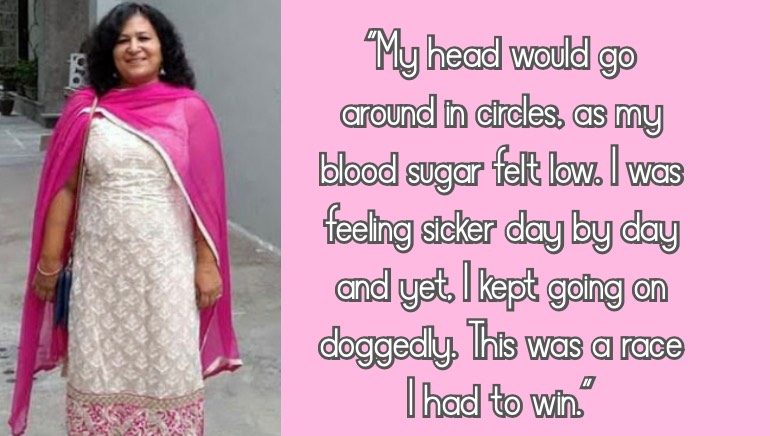 But the fire within was alight. Because soon after, I started brisk walking for an hour daily along with my gym. I was on a mission.

It took four months, but I did it…
By the end of the three months, the dosage of medication reduced. In the fourth month, they stopped completely. This phase would be the hardest. I would have to continue to do what I was and still, the disease had all the trappings to come back. The reason? My body was facing an insulin mismatch.

Also, read: Can’t keep type 2 diabetes under check? Here are 5 ways to sort you out

During this entire period, I was getting tested every week and this process continued even after the medicines stopped. This was a crucial phase, because my body was going through withdrawal. But my blood sugar stayed where it was! Normal!

My Hba1c levelled at 6.1, which was tremendous. On the physical front, I loved what I saw in the mirror. I weighed 60 kilos.

My ordeal began on the 19th of July, 2015. I was 51 years old. After about eight months, I wore a dress for the first time in my life. I had become a new person physically, emotionally and mentally. I had discarded the “old” me and the new me was someone with whom I resonated completely—in thought, in action and in words. For the very first time, I had the reins of my life in my hands. I was the charioteer.

Looking back, I realize that this whole experience was actually a game changer for me. It was a gift from the Universe. It made me who I am today. I let go of a lot of things during this time and not just the excessive weight. I changed big time. I became a new person. I set goals and boundaries. I learnt to know who I was. This period set the ball rolling for a newer me. And this me, is the most precious me.

GurgaonMoms (www.gurgaonmoms.com) is an online safe space for women and a nurturing ground where women engage, support each other, and discuss opportunities.