Not just fat to fit, from fat to strong: This is how I lost 23 kilos in a year

Updated on:11 September 2020, 19:38pm IST
Shweta Rai’s journey isn’t just about losing weight but about becoming strong. Read how this young mother battled gestational diabetes, lost the weight slowing her down, and made fitness her mission
GurgaonMoms

This story has been submitted by GurgaonMoms on behalf Shweta Rai, who is the founder of ReSculpt, co-founder of Krishak Agritech Pvt Ltd, a blogger and Instagram influencer.

I eat push ups for breakfast and I can make anyone fall in love with lifting weights. However, it wasn’t always like this.

I was a plump kid. I was used to people calling me ‘chubby and cute.’ In fact, it kind of stuck even during my college years when I weighed about 55 kilograms. The truth is that I was always comfortable in my skin.

And then college ended. I became extremely serious about my career. I would work long hours and at least six days a week. This is when my tendency to gain weight hit me with a vengeance and I didn’t even realize it.

How it all started…
I knew I was gaining weight but I always thought that it’s nothing that can’t be fixed with some dietary changes. What I had not realized was that my metabolism had gone for a complete toss because of my unhealthy eating habits and sedentary lifestyle. I had no idea that I weighed 85 kilograms on a 5-foot and 3-inches frame.

This reality dawned on me only when I went for my first gynaecologist visit during my pregnancy. When I saw that number, I was in utter disbelief. But, I thought that I should enjoy my pregnancy and worry about the weight later. So, I continued my unhealthy eating, but fate had other plans. I was diagnosed with gestational diabetes. 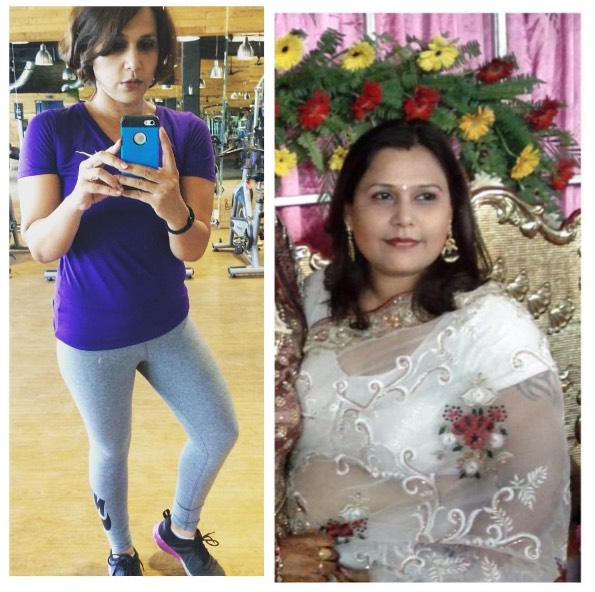 For someone who is terrified of needles, injecting myself with insulin six times a day and testing my blood sugar level eight times a day was nothing less than horrifying. I read up on gestational diabetes only to realize that I was, now, prone to type-2 diabetes. This was a jolt to me. The fact that my child could be afflicted with diabetes was the single most shocking thing that I needed to tell me it is time I get my act together.

Also, read: It’s time to reclaim your pre-pregnancy body! Experts reveal 7 ways to do so

Eating healthy helped me turn things around
The seeds of eating healthy were planted during the pregnancy when I was made to give up sugar, eat timely meals and walk as much as I could. I took my doctors instructions very seriously and actually followed through with the medical advice. It truly contributed towards me developing healthy eating habits and getting active. I really researched ways to lose weight and it only made me come to the conclusion that a shortcut method can actually be quite unhealthy. This time, I was determined to do it right.

I made a promise to myself that I’ll lose weight but in a healthy way
Balancing motherhood and work left me feeling weak and low on stamina. More than anything, I felt like I was running out of time for I was 31. Nonetheless, I was determined to do it the right way.

Also, read: From fat to fit: What losing 22 kilos in 5 months taught me about the power of endurance

Here’s how I took the first step towards fitness
I first started eating healthy but timely meals. No crash diets – I had vowed to myself. So, I would load up on complex carbs, fibres and lots of protein. I got myself a weighing machine and would track my weight every single day. I managed to lose my first 10 kilograms with diet and walks alone. This meant I had come down to around 73 kilograms! 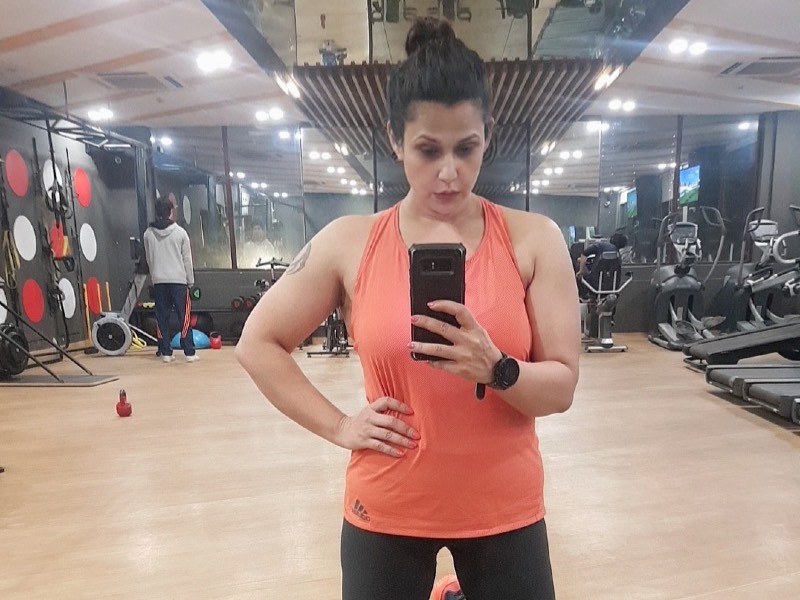 Once my baby was a little grown-up, I also signed up for Zumba classes thrice a week. However, I soon realized that 3 days are not enough. So, I added 2 days of yoga. What started as a weight loss program became my favourite hour of the day. The weighing machine kept tilting to the left which was the biggest motivation I needed.

I fell in love with weight training in the process of getting fit
I had realized that one can’t exercise their way out of a poor diet. Now, my will power had become so strong that I would eat healthy even during parties and weddings. I would allow myself occasional cheat days which only helped keep me on track. My diet was high protein, moderate carbs and low fat during this time.

So far, I was able to gain back the lost confidence but that wasn’t enough. It wasn’t holistic. I started to read and understand the problems that women face. This made me realize that the biggest myth of all times that the fitness world had been feeding us with was that strength training is not for women!

I had read so much on the importance of weight training for women and wanted to give it a try. It practically changed my life. Apart from becoming stronger and getting toned up, my stamina went up. I’m talking about both physical and mental stamina here. But, I also realized that weight training wasn’t taken seriously by the trainers. So, I started studying it, doing certifications and attending workshops.

So, yes, I juggled with multiple forms of workout. I did Zumba, yoga and weight training. Hence, I managed to lose more than 23 kilograms in a year. The best part is that it has been more than five years and I have managed to maintain it. In fact, over the years, I have stopped obsessing about an occasional increase here and there. I workout five times a week which includes eighty per cent weight training and twenty per cent cardio. Eating healthy is a norm at my place which means it isn’t a struggle anymore.

During this weight loss journey, I found my true calling in fitness!
I am currently 38  and run my own venture called ReSculpt for the past five years. I do personal training, with weight training being my forte. I have trained thousands of clients, mostly women, and made them fall in love with weight training. Most of them had never lifted before and are now addicted to it. I have conducted numerous workshops advocating sustainable fitness.

I strongly believe that fitness is not a synonym to weight loss. Weight loss should be a process during which we don’t just make our bodies healthier and stronger but also strengthen our mind. That is possible with a full commitment to diet, exercise and mental well-being. My mantra is, ‘Be strong, not skinny.’

GurgaonMoms (www.gurgaonmoms.com) is an online safe space for women and a nurturing ground where women engage, support each other, and discuss opportunities.