Meet pastry chef Bani Nanda, who wants period shaming to end just as badly as we do

Updated on:26 May 2020, 15:02pm IST
Bani Nanda, a pastry chef and businesswoman, manages to work during her periods like a boss! She talked to us about how she manages to do it all and why the taboo around periods needs to go away.
Sonakshi Kohli

If you’re a hardcore foodie with a tad bit extra love for fancy desserts, chances are that you’re already a regular at Miam Pâtisserie, Hauz Khas, Delhi.

From exquisitely-frosted cakes and melt-in-the-mouth macaroons to delectable croissants and puddings, this warm café caters to all your sweet tooth cravings with its delightful treats.

While you savour the taste of Miam’s mouth-watering offerings, you’ve got to know about the face behind all this baked awesomeness.

Here, meet chef Bani Nanda
A pastry chef and a businesswoman by profession, Bani Nanda runs Miam Pâtisserie along with her husband, Akshay.

“The nature of my job is hectic and on some days, the stress levels are very high. Being a chef definitely requires putting in hours of physical work that sometimes leaves me fatigued,” says Nanda.

What about the days she’s on her period?
Leaving alone the age-old period-stigma of not letting women enter the kitchen while they’re on their period, Nanda is a full-fledged multi-tasker—with or without her period—both, in and out of the kitchen.

That surely doesn’t mean that those five difficult days of the moth are any less of a problem for her.

“I’m a little crankier and I do tend to PMS. In fact, I tend to feel more exhausted from work while I’m on my period,” Nanda quips.

But, she manages to sail through like a boss
“My periods have never come in the way of my work or goals. It’s not the best time of the month, but I’ve learned to be strong about it,” she says.

“My mother taught me to not make a big deal about it in my head. She always told me that I wasn’t the only girl who’d get her period every month and I know that periods are an inevitable natural process. So, one has to continue living with it,” she adds.

That said, she understands how every woman’s menstrual cycle is unique and applies as well as promotes the same sentiment of period sensitivity at her workplace as well. 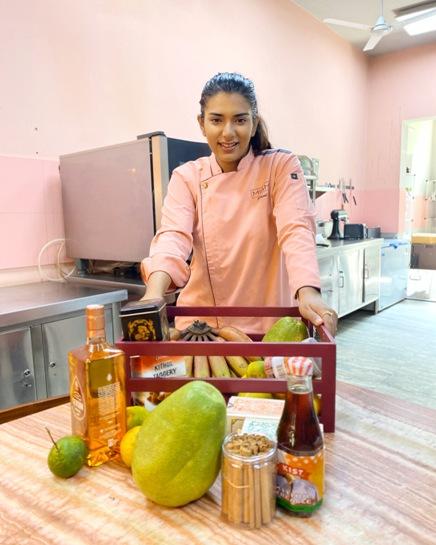 The lady surely doesn’t forget to be sensitive towards fellow sistas
“As a boss I’m very sensitive towards the female chefs when they’re on their period. Since everyone’s cycle is unique and different, I make sure to do my best as a boss. If they’re really uncomfortable, I tell them to take an off or send them home. In our office drawer, there is always a spare packet of sanitary napkins and I have consciously bred an environment of being supportive as a team. My male chefs are well-informed and they do their bit to be supportive. Sometimes they get crushed because so many of us are PMSing!,” says Nanda.

And just like all of us, she too is sick of period shaming
Nanda’s period-management strategy is that of acceptance, of acknowledging her PMS symptoms, of not letting them stop her from achieving her goals, and most importantly-of talking about periods openly.

“I’m sick of being ashamed of getting my period. In our culture and society, we are taught to make it a very hush-hush fair. You have to go to the chemist and literally hide your sanitary napkin as though you’re committing a crime or something. I just want to point out that it’s a part of reality and it happens every month to half of the world so people need to be more progressive and talk about it openly,” she says as she signs off.