Updated on:29 May 2020, 13:18pm IST
Do you still think period blood is dirty and that sour foods can make your cramps worse? Well, if you said yes, then it’s time to burst your bubble while busting these myths.
Sonakshi Kohli

That’s the thing about us Indians. We’re somehow so good at believing without proof and spreading baseless stories like wildfire. From silly political insinuations to PR-fuelled dating rumours of celebrities, to sadly—even menstruation.

It usually starts when a dadi, nani, or random “senior” relative in a conservative Indian household restricts menstruating women from entering the kitchen or the temple, citing their “impurity” as the reason.

We thus grow up believing that menstruation is dirty, and hold on to this and several other myths. However, what’s growth without some realisation, learning, and changing, anyway? Here’s doing just that with the help of Dr Deepa Dewan, associate director and head of unit, obstetrics and gynaecology, Max Hospital, Gurgaon who is helping us bust common period myths like a boss. 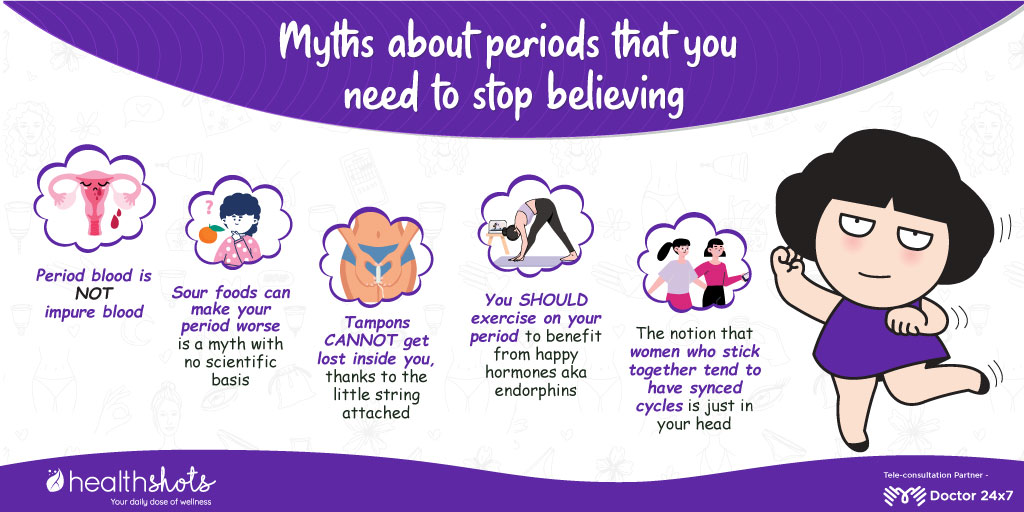 1. Period blood is impure blood
Sorry to break your bubble, folks, but the only impure thing here is your thought process if you believe in this myth. Because period blood is not dirty.

Every month due to the rise in the level of the hormones—estrogen and progesterone—the uterus forms a lining to support a possible pregnancy, explains Dr Dewan. However, when the egg released by the ovaries is not fertilised by a sperm and there is no pregnancy, the uterine lining sheds itself towards the end of the menstrual cycle when there is a drop in the level of the estrogen and progesterone hormones.

“So period blood is not dirty blood. It is basically the lining of the uterus, which receives a lot of blood supply during its formation,” she says.

2. Birth control pills are the only solution for PMS
“Birth control pills are one of the solutions to treat premenstrual syndrome (PMS) in women, which occurs due to hormonal imbalance in their bodies,” states Dr Dewan and adds that these pills contain hormones. Hence, it can help improve the condition of the patient.

However, she is quick to add that lifestyle changes such as staying active and exercising daily can also help relieve the symptoms of PMS to a great extent.

All this, due to a mysterious interaction between the pheromones (chemical substances released by animals into the environment that can affect the behaviour of those around them) of women living in close proximity.

“There is no concrete scientific evidence to support this claim,” says Dr Dewan, adding that all women have their own dates. So, if one woman gets her period during the initial days of the month and another gets hers in the middle of the month, both of them will get their next period after completing their respective cycles—even if they stay together.

“A woman with a low haemoglobin due to an iron deficiency, may not have a very comfortable period. In fact, any kind of deficiency of essential nutrients and minerals might end up giving you menstrual problems like irregular periods. Similarly, obesity and consumption of unhealthy food can make a woman more prone to getting a polycystic ovarian syndrome (PCOS). Hence, your diet may not directly ‘control’ your menstrual cycle, but it is definitely one of the factors that can affect your menstrual cycle and health,” explains Dr Dewan.

5. Period sex won’t make you pregnant
According to Dr Dewan, it is less likely for a woman to get pregnant if she has unprotected sexual intercourse while she is on her period. This is because a woman usually gets her period during the initial five days of her menstrual cycle while ovulation happens between the 14th to 16th day of her cycle. So, this is the time when the chances of conception are the maximum.

That said, the chances are ‘lesser’ not nil. Hence it is advisable to use protection even if you’re indulging in period sex.

Dr Dewan also adds that for someone who gets irregular periods and experiences spotting multiple times during her menstrual cycle, the chances of pregnancy due to unprotected period sex are even higher as their menstrual cycle is not fixed.

6. Tampons can get lost inside a woman
Tampons are little plugs made of absorbent materials like cotton and rayon and are inserted inside the vagina to absorb the period blood and keep a woman from leaking during ‘that time of the month’. They usually have a thread attached to the other side so that they can be pulled out whenever you want to remove them.

Now, there’s a lot of conjecture about tampons getting “lost” inside the vagina in case they end up slipping deeper into the vagina for some reason. However, Dr Dewan clears the misconception and says: “We do get a lot of patients, who say that they’ve forgotten whether they’ve taken out the tampon or not. But, that’s just forgetfulness as the tampon will be present somewhere inside the vagina and can be taken out easily. So, no, it cannot get lost mysteriously inside the vagina.”

7. Women should refrain from bathing while they’re menstruating
This surely is a gross one but many believe that bathing while you’re on your period can make you bloat or worsen your period cramps. However, Dr Dewan dismisses this myth and explains, “For someone, who is menstruating, it is rather important to take a bath so as to stay clean and hygienic. Since a woman is bleeding and also using a sanitary napkin or a tampon during her period, her intimate area is more prone to infections than usual.”

8. Women should refrain from exercising while they’re on their period
The conventional sanitary-napkin ads in which the female protagonist refuses to step out of her bed reeks of this belief about women limiting their movement during periods due to the fear of getting stains. There are also some, who believe, exercising can alter their menstrual flow or worsen period cramps.

On the contrary, though, Dr Dewan says that there is absolutely no scientific reason for a woman with a normal cycle to stop exercising while she’s on her period. Discomfort due to blood flow or due to wearing a sanitary napkin could make a woman reluctant to exercise. But, biologically, it is absolutely normal and okay to do so.

Not to mention, that exercise produces happy hormones called endorphins in the body, which can definitely improve your mood and help you deal with your period mood swings better.

9. Having sour food during your period can worsen period pain
As per Dr Dewan, there is no scientific proof about sour foods worsening period pain. The basic reason behind menstruation is the fluctuation of the ooestrogen and progesterone hormones during a 28-day cycle. Sour foods have no effect on these hormones and thus, this claim is baseless.

10. You can’t swim while you’re on your period
If it’s the fear of leaking into the pool and magically turning the pool water red that’s stopping you from swimming, you’d be disappointed to know that you might not produce enough blood to simply change the colour of the pool water even if you leak.

Secondly, if you wear a tampon into the pool, you’ll be just fine. The only risk, however, is that your chances of getting an infection while you’re on your period are higher than usual according to Dr Dewan. And that’s the only reason due to which you should be getting second thoughts about jumping into the pool while you’re on your period—not some stupid fear of colouring the water red.