A national-level swimmer who hated running, this is how Milind Soman became the Ultraman we know him to be

In his memoir, Made In India, Milind Soman opens up about his journey from being a swimmer to a runner. Come take a sneak peek into his life.

The pain in my calf was intruding into my thoughts now. To keep it at bay, I decided to quit the philosophical ruminations and think good, positive thoughts about my body, hoping like heck that that would help it heal.

I had learnt more things about my body since I had begun to run than I had in all my years as champion swimmer. I had started swimming when my body was still developing, and it had grown quite organically into a swimmer’s body, fashioning itself into the most efficient shape and form for that sport.

It wasn’t at all that simple when I decided to become a runner at the age of thirty-seven. I had had to learn, consciously, how to move differently and how to use the same sets of muscles in new ways, so as to convert my body into one most suitable for running. It took time and it took patience, but because I had been a sportsman, it was easier for me than it might have been for someone who hadn’t.

The more #India runs, the further it shall progress. And I stand in support of the #IndianNavy, urging you to sign up for the WNC Navy Half Marathon using your #Mastercard Because for every registration, @mastercardindia will donate Rs. 50 to Sankalp, a school for special children managed by the Indian Navy. Visit the link to register – http://bit.ly/MCNavyRegistration #StartSomethingPriceless @wncnavyhalfmarathon

When you pursue a sport at a high level over a long period, some natural instincts get honed more than others, and certain neural pathways are enhanced. Like every other artiste whose art emphasizes physicality—dancers, gymnasts, tai Chi practitioners, race-car drivers—I had developed a heightened sense of awareness of my body.

I was constantly mindful of how it was moving, standing, resting, because being casual about my posture when I was sitting or falling asleep in a bad position could end up giving me a catch or a pulled muscle, and I could ill afford that as a competitive swimmer.

I had also learnt to move ‘efficiently’—to achieve maximum impact while causing minimum damage to my muscles and expending the least amount of energy. That instinctive awareness of the body, its balance, and how it moves in its environment is called ‘proprioception’, and I had it in spades.

It was my swimmer’s body that got me an entry into modelling, but I believe it was my advanced sense of proprioception that helped me be successful at it—walking the ramp is all about arranging and moving your body in the most natural and efficient way—‘like an animal’. For anyone watching, that kind of movement—that kind of natural confidence often called ‘animal grace’—is also the most attractive thing in the world.

To this day, when I enter a room, people stop what they’re doing to cop a look, either openly or covertly. Part of it could be because they know my face, but I like to think that a big part of it is simply the innate admiration we all feel for someone who occupies space in a ‘natural’ way.

I was past the Causeway now and on to the last straight, closing in on the 23.2-kilometre mark at the Bandra entrance of the Sea Link. This was the point at which the route doubled back on itself. Once I had gained it and made the U, it would lead me back to the starting point, past the same sights and streets I had come up along.

I had almost reached the U when it happened. Excruciating pain shot through my right calf as it tightened and seized. Cramp! No, no, no! This wasn’t fair, this couldn’t be right! I was barely 1 kilometre past the half-marathon distance and my first full was already in jeopardy. The heat and dehydration caused by all that sweating had caught up with me, and things were only going to go south hereon. With my talk of proprioception and the connection between my mind and my body, I had tempted the Fates to show me my place. I had been overconfident; I hadn’t addressed the impending cramp until it had my calf in a vice.

Stop it! I told myself sternly. There is no doubt you overestimated your abilities, but moaning about that at this point is not going to help you. Focus on the goal! Force your mind to connect with your body now, so that it can sweet-talk it all the way home.

Right. With an effort, I hobbled to the U. 23.2 kilometres done in 2:09:43, 19.4 to go. I was still on course for my 3:45 finish. The cramp would slow me down for sure, but I could still hope for a sub-four-hour run, if nothing else went wrong. I mentally crossed my fingers. Keep moving! 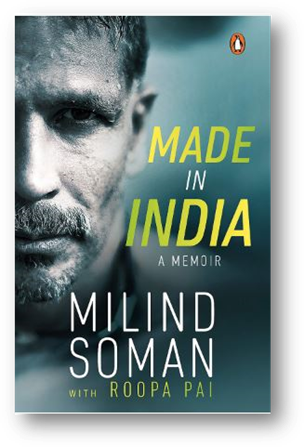 Excerpted from ‘Made In India, A Memoir’ by Milind Soman with Roopa Pai–with permission from Penguin Random House India.

International supermodel, but completely Made In India–Milind Soman needs no introduction. Also a national-level swimmer, Milind is the co-founder of Pinkathon and author of 'Made In India, A Memoir'.