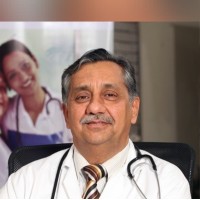 Dr Tarun Sahni is a General Physician/Internal Medicine Specialist with over 25 years of experience and has the following qualifications -MBBS, MD, DMM (Diploma In Marine Medicine, Mumbai).

He is an alumnus of Armed Forces Medical College following which he served in the Indian Navy for over a decade and took voluntary release to pursue his aspirations. He then worked in the UK and UAE prior to coming back to India to establish India’s first private hyperbaric treatment center at the Apollo Hospital, Delhi in the year 2000 – which he currently heads. Dr Sahni is known as the “father of modern hyperbaric medicine in India” and has over 25 publications and chapters in books. For this contribution to education and research in the field of Diving and Hyperbaric Medicine, he has been conferred the title of “Adjunct Professor” by the Apollo Hospital and Educational Research Foundation. He also has a mention in Limca Book of Records in 2000.